Who am I, anyway: 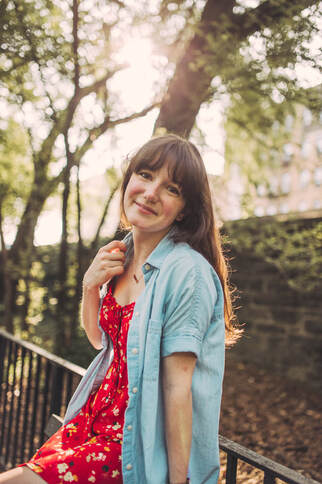 Lauren's musical background and athletic acting facility has catapulted her into the world of actor/musicianship in NYC and with regional theaters across the country. With music teachers as parents, it was only natural that Lauren began performing when she began her violin training at the age of four. She was involved with the Northern Ohio Youth Orchestra (Oberlin Conservatory), Baldwin-Wallace Senior Youth Orchestra (B-W Conservatory) and was honored to have performed in masterclasses with Milan Vitek and Regina Carter. From there, she began her dance training, and studied with many regional ballet companies. Lauren was a recipient of a scholarship to the Cecchetti International Ballet Summer School, and attended summer intensives with BalletMet Columbus.

Lauren went to Oakland University in Rochester, MI and graduated with a BFA in Musical Theatre. She received departmental honors, an Irene Ryan Award nomination for her acting work in The Pageant Plays, and a certificate of merit from KCACTF for her co-costume design for Grey Gardens. She interned at The Ensemble Theatre Community School in Eagles Mere, PA, under the direction of the wonderful Ann V. Klotz, and was fortunate enough to travel with six other Oakland actors to Greece, where they rehearsed and toured an original adaptation of Medea.

Since moving to New York, Lauren has interned with Millbrook Playhouse, learned how to make hats, dived into the world of folk/traditional music, helped create a new musical adaptation of Twelfth Night for FringeNYC, learned how to skateboard, and joined a cast of an Off-Broadway show with only three hours of rehearsal. Along the way, she's acquired a mandolin, a tenor banjo and a washboard, and dreams of being in a all-girl newgrass band. Lauren lives in Inwood with her cute boyfriend and their eighteen plants. Sometimes she dyes her hair blue, but most of the time, it's brown.